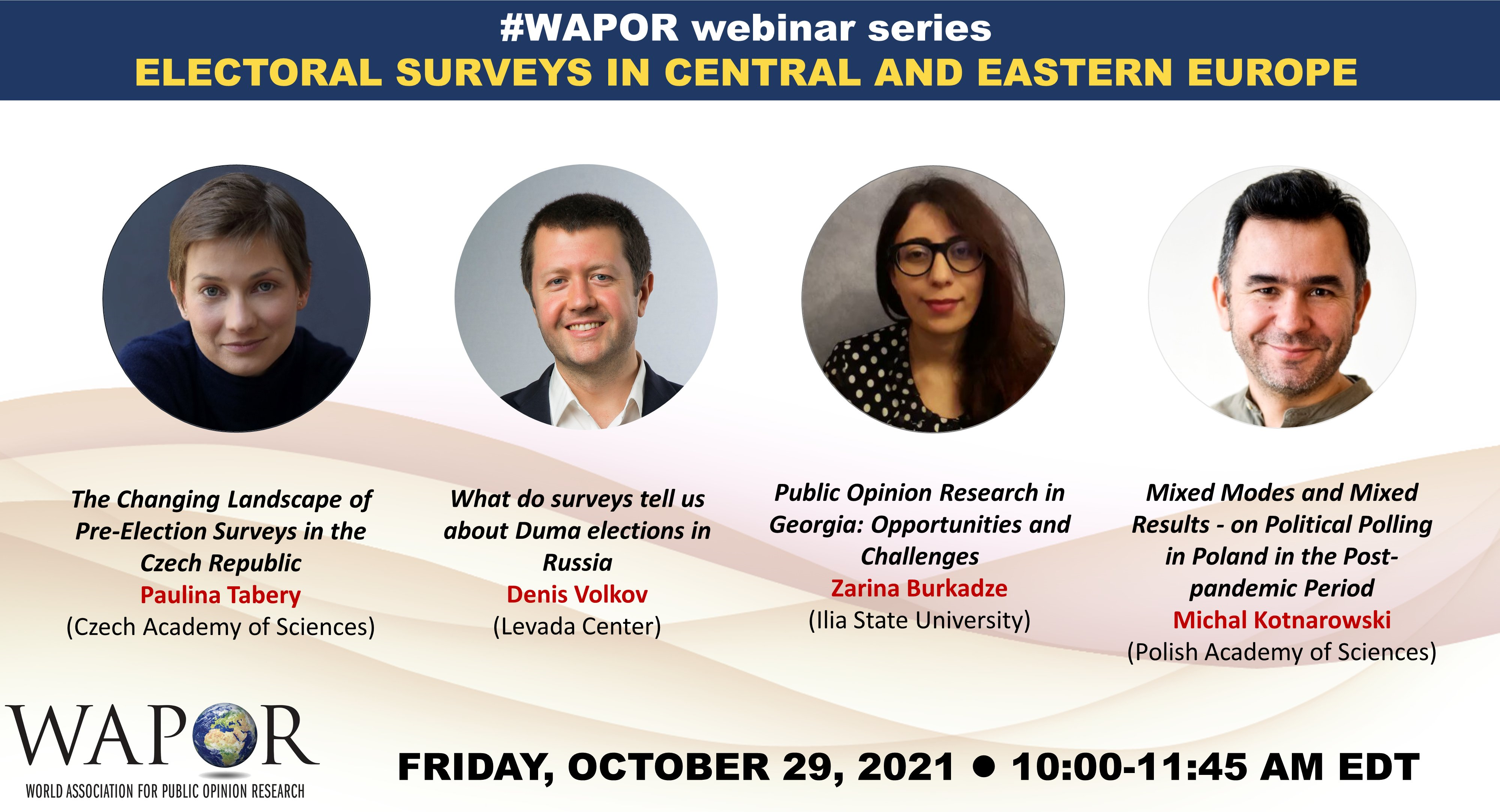 This webinar continues the series of public webinars by the World Association for Public Opinion Research (WAPOR). On Friday, October 29, we will meet to discuss the electoral survey in Central and Eastern Europe. Our speakers will address the various political, methodological, and other challenges and issues the pre- and post-electoral surveys experience in Central (represented by the cases of Czech Republic and Poland) and Eastern Europe (represented by the cases of Russian Federation and Georgia). Kseniya Kizilova, Chair of Liaison Committee of WAPOR, will moderate the discussion.

The Changing Landscape of Pre-Election Surveys in the Czech Republic

Paulina Tabery has been involved in public opinion research for more than 15 years, first in the private sector and then academia. She is currently head of the Public Opinion Research Centre at the Institute of Sociology of the Czech Academy of Sciences. The centre implements the Our Society project, which includes monthly surveys on various topics as well as pre-election polls. Paulina's academic work focuses on opinion formation, interpersonal and media communication, survey instrument testing, political communication, and the quality of pre-election surveys.

What Do Surveys Tell Us about Duma Elections in Russia

Denis Volkov is a Russian sociologist, in June 2021 he was appointed as a director of the Levada Center, a Moscow based independent sociological research organization. Over thirteen years with the Center he was involved in more than a hundred quantitative and qualitative research projects on different aspects of Russian society. Volkov has authored works on sources of political regime’s support, political attitudes of the Russian youth, protest activities and civil society, business and elites opinion in Russia. He was a columnist for Vedomosti, RBC and the Moscow Times newspapers. He now writes for Forbes Russia and the Carnegie Moscow Center.

Michal Kotnarowski is a sociologist and Political Science scholar. He works as an assistant professor at the Institute of Philosophy and Sociology of the Polish Academy of Sciences. He is a member of several survey research projects, including Polish part of the European Social Survey, the Polish Panel Survey POLPAN, the Polish National Election Study. Before joining academia Michal worked as a research manager for leading Polish public opinion institutes (PBS and TNS). He was responsible for various studies on political attitudes of Poles, exit polls and predictions of elections results.

WAPOR is pleased to offer this webinar free of charge.